flat earth lunacy jonah the scientist is a liar

Dear Visitors,
Thank you for stopping at FlatEarthLunacy.com
My journey to debunk flat Earth YouTube channels started in 2012.
As a scientist with college degree in Astronomy, minor in Physics and Mathematics, I was appalled to find folks telling outright lies and presenting bad science to bolster suspicion of our known accepted reality - that the Earth is a beautiful blue globe.
For the first 3 years I left video comments showing solid scientific evidence that flat Earth is fiction.  It's based on personal religious belief and purposeful conspiracy.   There are different personal agendas at play.   During those 3 years’ channels owners deleted my proofs and eventually banned me.  They worked to keep their video comment sections "clean" of any discussion contradictory to what they wanted to present.
Then for the next 2 years I posted my video comment debug proofs on Google plus.  I wanted a forum where I could post - without being deleted by the channels I was debunking.  That worked fine for a while, but eventually I noticed that about half of my articles, even though marked as "public," were not visible because of Google plus' auto spam/editing.
So in April of this year (2017) I decided to start this new blog (FlatEarthLunacy.com) so that none of my work could be deleted anymore.
This blog clearly shows scientific proofs that debunk everything that flat Earth proponents claim.
Here we also expose the comments those YouTube video channels delete, because they don't want you to see them.
The Earth is not flat.  That claim is a conspiracy theory perpetrated by ignorant people who have ulterior personal motives and agendas.
The Earth is a beautiful blue spheroid globe spinning on an axis 23.5° once each day, and orbiting the Sun every 365.25 days.

Dear Readers,
Welcome to the FlatEarthLunacy archives, filled with lots of facts about our true globe Earth and explanations as to what motivates flat Earth folks.
These articles once appeared on our main blog page, but have been moved here to provide more room on the main page.

Creationist = a person who believes that the universe and living organisms originate from specific acts of divine creation, as in the biblical account.
Scientist = a person who is studying or has expert knowledge of one or more of the natural or physical sciences.

Make no mistake.  There is nothing wrong with science or the evidence that proves the Earth is a globe, spinning on axis, and in orbit around the Sun.

Flat Earth is primarily a Christian biblical literalist attempt to change public opinion, in favor of the Bible and against science.  This has been going on since the time of Galileo. 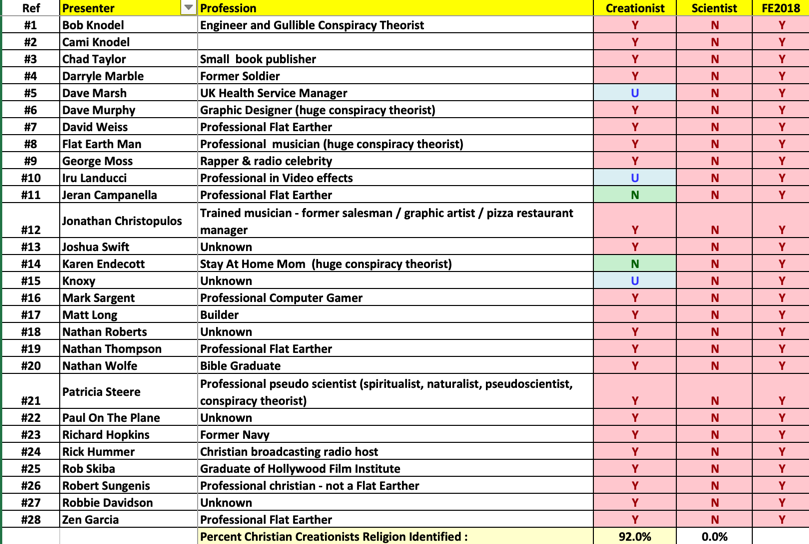 The FLAT EARTH REPORT: A Real Take On Fake News